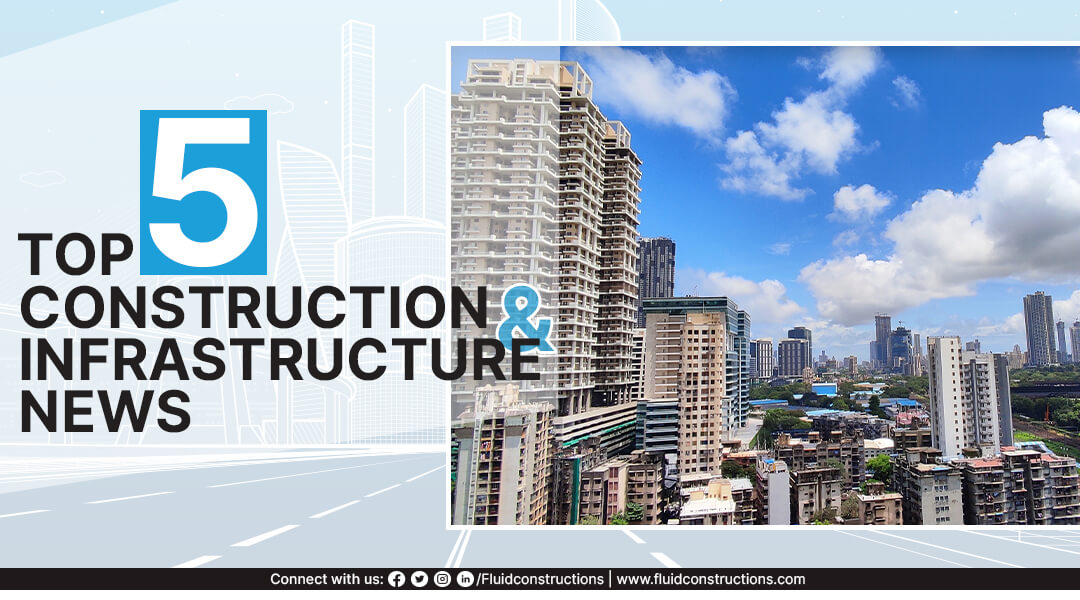 In India, infrastructure development happens constantly. Keeping up with the latest construction news is important.

A booming construction industry is an indicator for a growing economy. And there are constant changes regarding the affairs of this dynamic industry. It has seen success in the past year, despite the covid crisis.

The construction sector is using technology to improve efficiency and maintain sustainability. With major industry trends like BIM, robotics and use of advanced building materials, we are also exploring green building solutions to remarkably decrease the negative impacts of construction on the environment. These developments in the infrastructure and construction industry would also have a positive effect on the growing economies.

Here are 5 latest construction news to update you about this sector:

New step towards decarbonization through innovation

A multi-stakeholder coalition called the Build Ahead was devised to tackle the issue of environmental crisis. To stop operational emissions, Xynteo along with JLL, Godrej Construction, Lodha, JSW Cement, SED Fund and Shell India decided to join hands. It is a device to support India’s pledge to achieve zero carbon emission by 2070.

The coalition focuses on shifting mindsets and enabling increased use of low-carbon building materials. India’s cement sector is the second largest and one of the most energy efficient cement sectors in the world. This coalition aims to take this further and reduce embodied and operating emissions. The former refers to the carbon emitted during the construction process and the latter refers to the emission in the operational stage of the construction project.

This strong initiative by leading players of the industry can be a game changer for India infrastructure in terms of reducing carbon emission.

Steps taken by the government to improve road safety

Our Government is investing 1.4 trillion in infrastructure development through the National Infrastructure Pipeline.

In the light of the sudden death of former chairman of TATA, Cyrus Mystry, Transport minister Nitin Gadkari emphasised on improving road safety. The aim is to develop free flow of traffic on toll booths. He also called for US investors to invest in road and infrastructure construction in India. Earlier this year, he had talked about his target to construct 60 kilometres of highway per day in India. The country is ready to recover from the slowed construction of highways in the COVID-19 crisis.

Twin towers demolition waste to be recycled as construction material

Noida Authority assigned the contract to Re Sustainability to recycle the waste generated from Supertech’s twin towers. This is to be done within the next three months. A majority of the waste would be converted into sand and aggregator and the remaining would be turned into tiles. The company would get ₹156 per tonne for completing the project on time.

“We are aiming to achieve 100 per cent recycling of this 30,000 tonnes of waste. We will convert waste into 9,000 tonnes of sand (fine and coarse), 18,000 tonnes of aggregator of 10 mm, 20 mm and 40 mm sizes,” said Re Sustainability’s CEO, Masood Mallick. He also said that the recycled material would be sold at a discount in the market.

According to a survey by The Confederation of Real Estate Developers Association of India (CREDAI), there is a 34-40% increase in the cost of raw materials for construction.

Subsequently, the price of residential properties of real estate has also increased. The fluctuating market has raised challenges for the real estate industry. The influx of the population in cities has increased the demand for property and it is difficult to meet. The cost of raw materials increasing along with constrained monetary supply is a key reason for this.

The costs of essential materials such as cement, steel etc. have skyrocketed in the last two years. The Russia-Ukraine war has worsened the situation.This is a rising concern in the construction sector that needs to be addressed. The president of the real estate body of CREDAI suggested that a reduction in the price of the fuel tax would have an impact on this rising inflation.

After the prolonged drought in south-west China, there is a plan to develop water infrastructure upstream of the Yangtze river. The river is known for its dam infrastructure all over the world.

The Ministry of Water Resources has given the green flag to 25 projects with an investment of 1.7 Trillion Yuan ($246 billion). It plans to build the world’s longest water tunnel with the aim of moving water from the Yangtze river to reservoirs of Northern China. The construction of the 200 kilometres long tunnel is named as  the South-North Water Transfer Project. It plans to move forward many such labour-intensive projects in the coming years to increase employment.

China had to put industrial power supply on hold in order to redirect it to households in Sichuan because of water shortage. Looks like China is all set to evade such situations in the future.

The construction industry in India is expected to progress at an annual average rate of 6.6% between 2019 and 2028. More and more construction companies around the world are turning to emerging technologies and it would surely lead to a more sustainable construction sector. There is hope to receive positive news in this sector in the coming years.